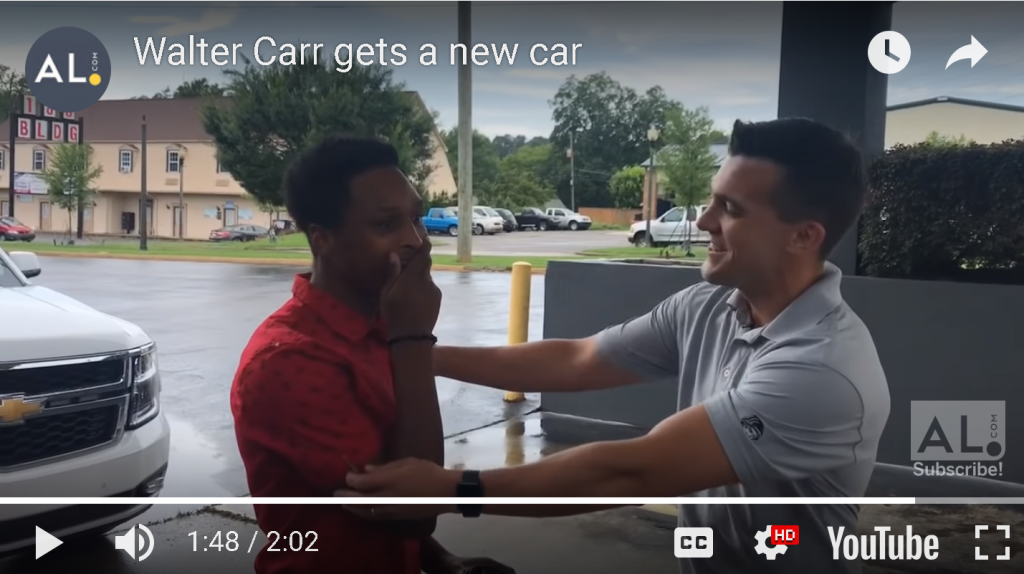 When you read an employment law blog like mine, odds are you’re going to see a post about an employer that did something bad, or at least is accused of doing something terrible.

This one’s about an employer that did something good for an exceptional employee.

Walter Carr recently graduated high school and hopes to serve his country in the U.S. Marines. In the interim, he began a new job with a company called Bellhops.

Mr. Carr has a 20-plus-mile commute to his job. And, on or about his first day of employment, things did not start well for him.

His car broke down.

Now, I’ve read a lot recently about job ghosting, where an applicant fails to appear for an interview. And, given the circumstances here, I could imagine how Mr. Carr, who already had the job, would have been unable to appear for work on Day One. Maybe even call it quits altogether.

Instead, Mr. Carr walked those 20-plus miles all night, in the dark, to Pelham, Alabama to get to work.

Carol Robinson at AL.com reports here about what happened next:

It was in Pelham that the trek took a surprising turn. Kindness and concern from four Pelham police officers coupled with publicly-posted words of amazement and admiration from the moving company’s clients about Carr’s work ethic and dedication, led to a massive pat on the back Monday from Bellhops CEO Luke Marklin.

Marklin drove in from Tennessee under the guise of meeting Carr for coffee to personally thank him. That meeting ended with Marklin surprising Carr by giving Carr his own barely-driven 2014 Ford Escape.

“I am honestly blown away by him,” Marklin said of Carr. “Everything he did that day is exactly who we are – heart and grit. So far, he’s batting 1,000.”

An emotional Carr had just one word when Marklin handed him the keys. “Seriously?”

If you want to watch of the video of Mr. Marklin gifting Mr. Carr the automobile — you know you do — click here.

This Fox Business interview with Mr. Carr and Mr. Marklin is pretty cool too. (It got a little misty in there, didn’t it?)

Way to go, Walter! And good on you too, Bellhops.

[Editor’s Note: I recognize that all of this happened over the Summer. Did you think that I actually typed out an entire blog post without first confirming the date on the — aw damn! 🤦🏻 Well, I just read about it yesterday. So, it’s news to me. And, maybe, news to you too.]