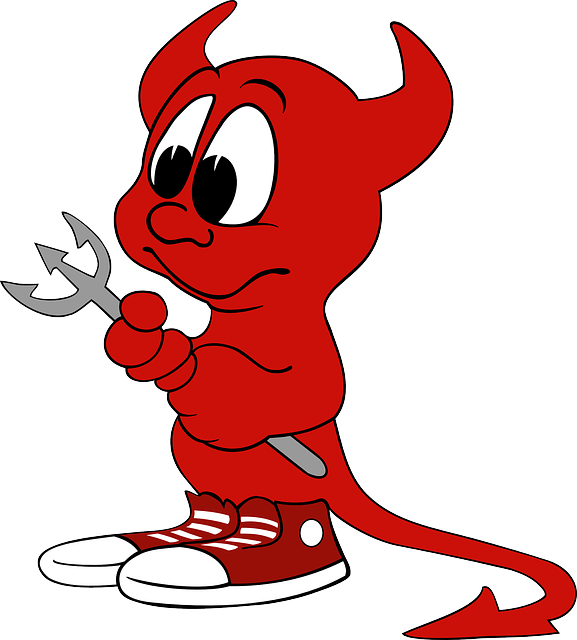 At least your employee didn’t attempt an exorcism on a co-worker.

Not such a pain-in-the-butt problem now, is she?

Special shout out to a few readers of this blog who alerted me to this religious discrimination complaint filed a few weeks ago in Kentucky state court. I’ll let you grab your popcorn before I get to some of the most cringe-worthy allegations.

You good? Alright, here we go…

And then there was the packet.

Packet, Eric? Like a packet of sugar or Sweet’N Low.

I’ll quote from the complaint:

The Plaintiff was also given a packet of papers by Lindon [his manager] to be completed and turned in. The packet contained 1 page of  instructions, 2 pages containing a release and indemnity agreement, and 9 pages of questions.

The packet was printed on red construction paper and contained many personal questions which would be irrelevant to his employment status.

The form given to the Plaintiff, which Lindon demanded that hecomplete, contained a number of questions, including, but not limited to, the following:
a) What is your church background?
b) Briefly explain your conversion experience.
c) Were you baptized as a child?
d) In one word, who is Jesus Christ to you?
e) What does the blood of Calvary mean to you?
f) Is repentance part of your Christian life?
g) What is your prayer life like?
h) Were you a planned child?
i) Were you conceived out of wedlock?
j) Have you personally ever had psychiatric counseling?
k) Have you, your parents or grandparents been in any cults?
l) Have you ever made a pact with the devil?
m) Have you ever been involved in Eastern religion?
n) Have you ever visited heathen temples?
o) Do you have any witches, such as “good luck kitchen witches,” in your home?
p) Do you have lustful thoughts?
q) To your knowledge, was their evidence of lust in your family line?
r) Do you frequently masturbate?
s) Have you ever been a victim of incest by a family member?
t) Have you ever committed incest, rape or molested anyone?
u) Have you ever committed fornication, adultery, been with prostitutes, had homosexual or lesbian desires or experience?
v) Have you ever sexually fantasized about an animal?
w) Have you been in involved in oral or anal sex?
x) Have you fathered a child that has been aborted?
y) Has pornography ever attracted you?
z) Do you have desires of having sex with a child?

This allegedly went on for nine pages.

Although, as a lawyer, the most offensive part here is the 2-page release and indemnity agreement that supposedly accompanied these questions. Where does one locate the appropriate “good luck kitchen witches” indemnity language? If there’s anyone in Kentucky who can point me in the right direction — actually, please don’t.

Oh yes, the plaintiff also alleged that his manager insisted that, after the plaintiff completed what ironically was the questionnaire from hell, he must accompany her to church for a cleansing. However, the plaintiff refused to turn over the form and declined the exorcism, both of which are probably good choices. He also avoided the prayer sessions in the hotel lobby that his manager supposedly organized for him with members of her ministry.

Ultimately, amidst the crazy and other threats that he would lose his job, the plaintiff quit, lawyered up, and sued for religious discrimination. He also asserted some related claims, one one of which is called the “Tort of Outrage.”

Someone fetch me a cigarette and some whiskey to pour on my S’mores Cereal.

So, do you still think that you have a problem employee?

Email me if you can beat this.
Newsletter
Eric B. Meyer