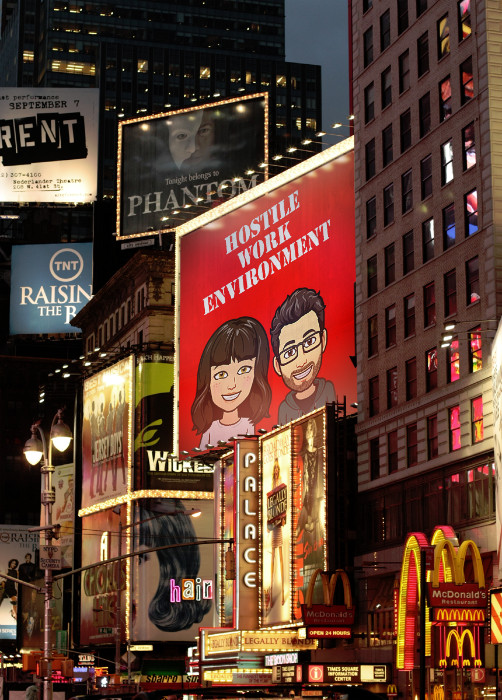 Do you like quick-witted snark, mostly about workplace shenanigans?

So, picture this blog, except in podcast form and with folks that actually have quick wits. I’m talking about the Hostile Work Environment Podcast (available on iTunes and Spotify and now on YouTube too).

The Hostile Work Environment Podcast is the brainchild of Marc Alifanz. It debuted a few years ago and had a successful run of 54 episodes with five-star ratings out the wazoo. But then life got in the way. So, Mark and his co-host Dennis decided to retire the podcast while they focused on their 9-5’s.

That ended when, unfortunately for Marc, 2020 began with a nasty speedbump.

That is, Marc’s company decided to outsource HR and, with it, his Chief Human Resources Leader and General Counsel job. However, being the class act that he is, Marc responded in a perfect way by leveraging social media to help his former colleagues land new jobs.

Meanwhile, Marc is now refocused on starting his own law practice. And he’s got under ace up his sleeve too.

You see, like the Undertaker — everything comes back to WWE for me — Marc has brought the Hostile Work Environment podcast back from the dead.

Yesterday, Marc rebooted the podcast for a second season with a new co-host, none other than Kate Bischoff, the founder of Thrive Law & Consulting.  I’ve known Kate for several years. We cross paths at HR events, and she publishes many blog posts and articles online. Most recently, Kate became ERE’s new legal columnist. She’s awesome!

So Marc and Kate together discussing employment law on a podcast is like peanut butter and jelly. The highest praise I can possibly give the Hostile Work Environment Podcast is that “when I got a notification on my phone that their first podcast episode had gone live, I immediately switched over from a live Howard Stern Show on the SiriusXM app to listen to the Hostile Work Environment on Spotify.”

(In full disclosure, I switched back to Howard in about five minutes. After all, bababooey. Come to think of it; maybe this wasn’t the time or place for full disclosure.)

But, Marc and Kate can still quote me.

And, I’m still encouraging all of you to listen too.