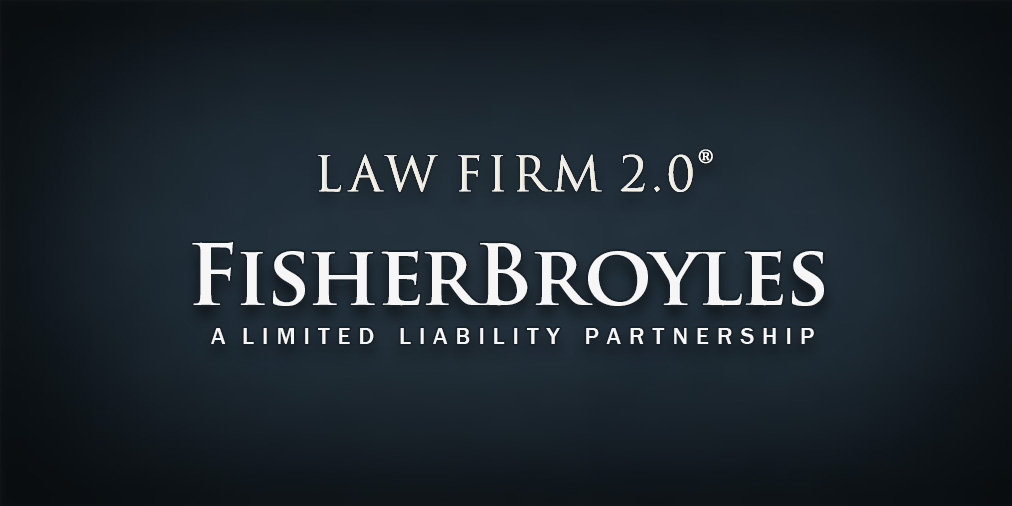 Today is my first day at FisherBroyles, LLP.

[If you missed “Thank You (Part I),” Friday’s tribute to my former colleagues at Dilworth Paxson, you check it out here.]

I have so much to tell you about this exciting opportunity with FisherBroyles, and my reasons for joining this cutting-edge law firm.

But, let’s start at the beginning.

It’s fitting that this courtship began with a LinkedIn message.

Like many others, my LinkedIn network includes many people that I’ve never met in real life. Of that group, most are individuals with whom I have never corresponded before. And, out of that subset, I received a message back in August from the General Counsel of a firm called FisherBroyles, which is apparently The Most Important Law Firm You’ve Never Heard Of.

The GC’s message was straightforward and to the point:

Eric, I love your posts. They are spot on. Would you have any interest in discussing a partnership position with FisherBroyles? We are a large law firm without the large law firm nonsense. Our partners keep [much] of the work they bring in and perform, actually work well as partners, and there is no billable hour requirement (just to name mention a few of the highlights). Let me know.

At that moment, I felt a little like Renée Zellweger from Jerry Maguire.

But, this short LinkedIn message from a total stranger seemed too good to be true.

Still, I followed up with the General Counsel. (His name is Joel by the way. And he is not a Nigerian Prince with a bank scam.) After we spoke a few more times, Joel invited me to talk with any attorneys at the firm from whom I wanted to learn more about their experiences at FisherBroyles.

I decided to take Joel up on his offer.

I checked the FB roster and quickly realized that I knew a bunch of people there; great employment lawyers like Amy Epstein Gluck, Richard Cohen, and Christina Bost Seaton.

And, yes, each of them raved about this firm.

I also spoke with a Philly guy, Ari Levine. Ari is a Morgan Lewis alum and former general counsel of a private company.  Much like the others before him, Ari sang the FB praises. Indeed, I was sensing a trend here. Former BigLaw attorneys — talented alums of some of the most prestigious firms in the world — who loved the freedom and flexibility of the FisherBroyles platform.

Still, there was a common refrain. Actually, each person had a complaint. Eh, let’s call it a regret.

“I wish I had made the change to FisherBroyles sooner.”

Music to my ears!

What happened next was like something out of an X-Men movie.

Joel invited me to attend the FisherBroyles holiday party in Atlanta; a final interview of sorts. So, I packed my bags and headed to the airport, anxiously awaiting the departure of my flight to the ATL.

Of all the days, Atlanta got “slammed” with about 2 inches of snow. That was enough to delay, and ultimately cancel, my flight.

But, we were not about to let a little snow get in our way. Thus, we rescheduled for lunch in Atlanta in early January. And, once again, I packed my bags and returned to the airport, anxiously awaiting the departure of my flight to the ATL.

Except, of all days, the weather gods chose this one to “bless” Atlanta with an ice storm. Flight canceled.

And me joking with Joel that I’m actually Storm from the X-Men.

Why did I say yes to FisherBroyles?

There are several reasons. Here are a few of them:

1. FisherBroyles is a national, full-service law firm. My blog and overall social media presence have blown up over the past several years, garnering a broad fan base across the country. Consequently, I have yearned to join a law firm with a matching geographic footprint.You see, I communicate a lot with readers of my blog. Active communication helps with my blogging goals. That is, through my conversational writing style on legal issues about which your lawyers may update you in a few weeks (months?), I try to build relationships and convert those engaged readers online to paying clients offline. While I have been successful, not having a bench — let alone a whole stash of talented employment lawyers in places like Texas and California, for example — impedes me from convincing an employer in the West to pay this dude from the East for advice on employment law issues. That problem is now solved. I’m ready to roll!

2. I get to spend more time with my family. FisherBroyles is the largest full-service, cloud-based law firm in the world. Cloud-based means no offices. No offices means that I work from home. Or possibly the Starbucks around the corner from my house. (I have taken a solemn vow to shower each day and at least dress in “Starbucks-appropriate” attire. ) Either way, I save time not commuting to work in Philadelphia each day, which means I finish work earlier and see more of my family.

3. FisherBroyles attracts some of the best lawyers from some of the best law firms. No offices also means lower overhead. So does no associates. That’s right. We’re all partners, and you never have to pay for us to build an ivory tower or to train a young associate. Instead, you get talented, experienced, and efficient attorneys. And we pass along this lower overhead to clients in the form of lower rates.

Just imagine an attorney at a white-shoe NY law firm with not only big billable-hour demands, but having to charge a client something like $800, $1000, or even more per hour. Then, at the end of the year, some Executive Committee retires to a star chamber to evaluate to those objective statistics subjectively. The result is a tired, stressed lawyer who earns way less than he or she should.

FisherBroyles provides a platform for that same attorney to charge lower rates to clients. And we’re incented to help each other out. According to this article in the New York Law Journal from Susan DeSantis, approximately 60 percent of FisherBroyles’ annual revenue in 2016 was derived from partner collaboration. Ms. DeSantis’s article is entitled, “FisherBroyles: Partners Earn Twice as Much as They Did at BigLaw.”

So, yeah, there’s that too.

4. FisherBroyles is experiencing “hockey-stick” growth. In a recent podcast, James Fisher, Founder and Managing Partner of FisherBroyles, noted that it took the firm about 12 years to go from 6 lawyers to 100. Then, it took less than 2 years to go from 100 to 200. The plan is to get to 300 lawyers by next year and scale it internationally. Indeed, cloud-based law firms like FisherBroyles are growing much faster than the traditional BigLaw model. Next stop, AmLaw 200.

Ultimately, however, one of the biggest reasons that I decided to join the FisherBroyles team was that I wanted to bet on myself.

And FisherBroyles wanted to bet on me.

Yes, there’s nothing like that feeling you get from that vote of confidence.

Will this bet pay off? (I hope so.) Is this too good to be true? (I hope not.) Whatever happens, I’m jumping in with both feet. (They’ll have shoes on, not just socks or slippers.)

And I can thank FisherBroyles enough for this opportunity.