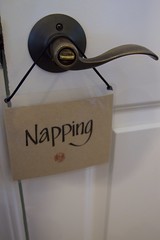 That George Costanza was definitely on to something.

A federal court in Virginia (here) recently denied an employer’s attempt to dismiss the complaint of a former employee who claimed that his rights under the Americans with Disabilities Act were violated when his employer failed to accommodate him by waking him when he fell asleep on the job.

The ADA requires that an employer accommodate a disabled employee, if doing so will not cause undue burden to the employer, but will still allow the employee to perform the essential functions of his job.

Sure enough, the plaintiff pled in his complaint that he had fibromyalgia (a disability that prevented him from getting a good night’s rest), informed his employer, and could satisfactorily perform his job if his employer would just wake him up when he nodded off. However, the plaintiff alleged that his employer refused to provide this reasonable accommodation.

Expressing its skepticism that the plaintiff was qualified to perform the job, the whole sleeping at work thing, the court nonetheless denied the employer’s motion to dismiss based on the scant record before it.

Because, seriously, how much could it cost to whip up a double Jolt Espresso? (I take mine with two Splenda and a bendy straw. Just like the Queen of England).

But, alas, this sleep accommodation conundrum will remain one of life’s great mysteries, as the parties agreed to dismiss the case last week.