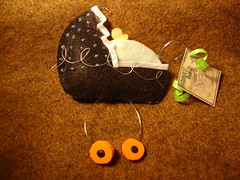 I have no idea. I was hoping that one of you could help me out.

Oh, wait, I’m supposed to be the expert here. Ok. Fine. I’ll play some music and dish the deets — hint, it has something to do with the picture — after the jump…

Over the weekend, after I had opened up my present — I mean, uh, this present — I read this case about a woman in Michigan who claimed that her former employer had discriminated against her in violation of the Pregnancy Discrimination Act. Specifically, the woman argued that offensive comments from her boss about her care-taking responsibilities as a new mother qualified as discriminatory behavior under the PDA. The federal court disagreed:

This is not correct. The PDA only protects a woman’s “decision to become pregnant or to work while being either pregnant or capable of becoming pregnant. . . .”

However, the court added that the plaintiff may have a claim for “sex-plus” discrimination:

“Sex-plus” discrimination exists when a person is subjected to disparate treatment based not only on her sex, but on her sex considered in conjunction with a second characteristic. A sex-plus cause of action has been recognized by other courts…where a plaintiff alleges she was discriminated against for being a woman with small children. (citations and quotations omitted)

For more on sex-plus discrimination and treatment of employees with care-taking responsibilities, check out this Enforcement Guidance from the EEOC.

Update: I awoke in a cold sweat this morning and realized that I could have chosen this for today’s blog soundtrack. I don’t believe that sex-plus discrimination was what STP had in mind when they wrote it. But, you never know…

Update #2: Reminder: If you have yet to vote for my blog in the ABA Journal Blawg contest, you can do so by clicking here. It’s fast, there is no spam, and I really appreciate your vote!