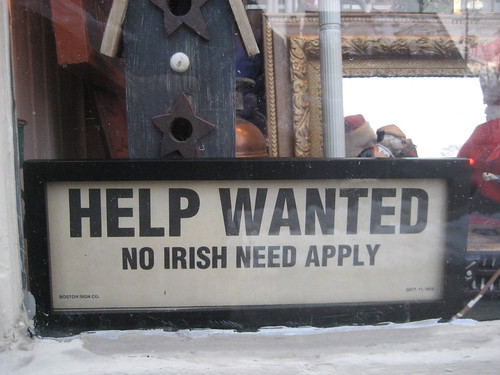 Pattie on Flickr (“In an antique shop window” https://www.flickr.com/photos/piratealice/3082374723)//embedr.flickr.com/assets/client-code.js

Even if you operate an antique shop, this sign is not a good look for your business.

So, as you can imagine, the State of Illinois wasn’t too cool with one of its local employment agencies taking out an advertisement in a local publication in which it sought “Lots of Mexicans” “Honest and sincere (provide the best Mexicans).”

As it turns out, that violates Title VII of the Civil Rights Act of 1964 according to this recent federal court opinion.

Title VII contains an explicit ban on this type of stuff.

Specifically, “employment agencies” cannot “print[] or publish[] any notice or advertisement . . . relating to any classification or referral for employment by such an employment agency . . . indicating any preference, limitation, specification, or discrimination, based on race, color, religion, sex, or national origin…”

The exception is where religion, sex, or national origin is a “bona fide occupational qualification for employment.”

In this particular case, the employment agency didn’t deny that it had placed the advertisement. Instead, it argued that “[m]ention of race is discriminatory only where there are people who are discriminated against and whose interest is adversely affected by the mention of race.”

That’s creative. Kind’ve like me arguing that my younger son’s snowy face plant yesterday was hilarious because he didn’t cry immediately afterward.

No. It was hilarious because whose going to see that and keep a straight face.

And here’s what the defendant violated Title VII:

In defense of this employment agency, well, there is no defense. And this case reaffirms that intent means nothing under Title VII.

Hopefully, you’re not naive enough to advertise for one particular race or national origin.

But, I’ll tell you where I do see some employers slip up. And, that’s with the word “young” appearing in their job ads. I’m not talking about “seeks teacher to work with ‘young’ children.” Rather, I mean, “Were [sic] looking for young, motivated, and eager to learn [sic] individuals.”

Otherwise, you may end up doing a legal face plant that’s not so hilarious.