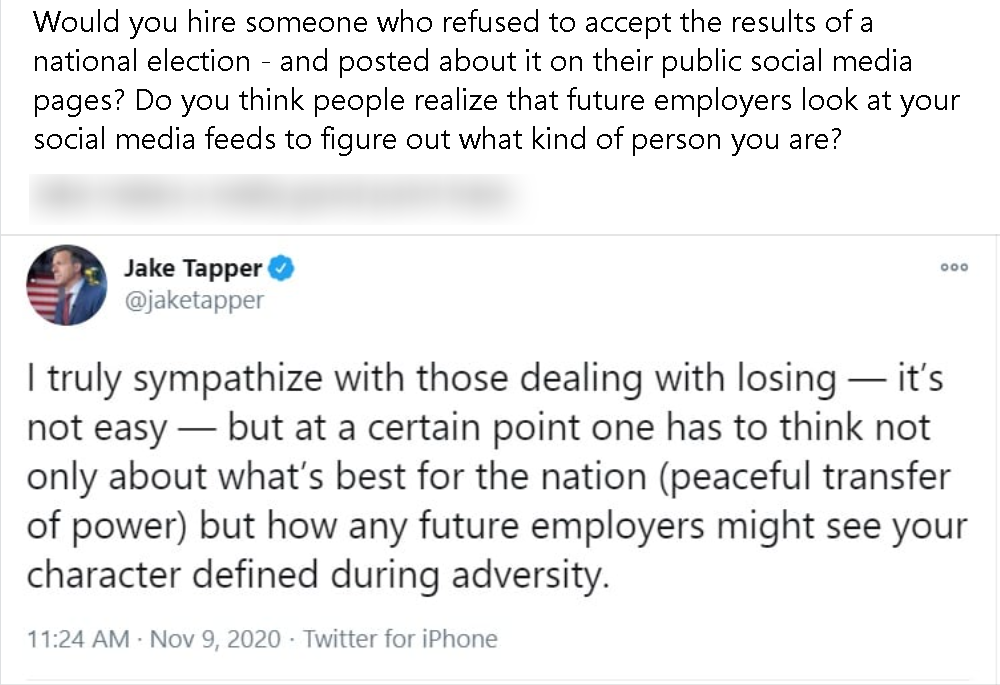 I had planned to move away from politics today, but I saw this on my Facebook feed yesterday and just couldn’t shake it.

Now, I want to make this as non-partisan as I can. But, this tweet comes from Jake Tapper at CNN, whom some of you may consider “Fake News,” and he’s commenting on the presidential election.

Still, I mean it when I say that this was not meant to trigger anyone. And, I get that I’m pressing my luck posting about politics on back to back days. But, politics aside, I consider Mr. Tapper’s comment a thought-provoking question. (The comment above it is not from Mr. Tapper).

That is, let’s say that you learned that a job applicant refused to accept the outcome of the election. Or, to make this truly non-partisan, let’s suppose that a candidate remained outspoken about how President Trump colluded with Russia. (Special counsel Robert Mueller’s investigation did not find sufficient evidence that President Donald Trump’s campaign coordinated with Russia to influence the United States’ 2016 election.) My point is that, regardless of party, people can have deep-seated, outspoken, politicized views.

So, regardless of party, is politics ever a proper prism through which to judge a worker’s character?

Please email me and let me know. I’d love to hear from you.

(And I promise to end the political posts. For now.)