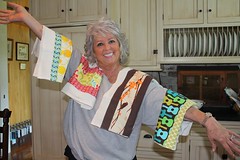 Somewhere, I picture the folks at Merriam Webster franticly revising the definition of “Pyrrhic” to cross-reference a stick of butter Paula Deen.

Yesterday at The Employer Handbook, I discussed the EEOC losing a major battle in its war against background checks.

Today, it’s all about winning the battle, but losing the war.

The court determined that, “at best, Plaintiff is an accidental victim of the alleged racial discrimination.” Specifically, it held that the Plaintiff, who is white, lacks standing to assert claims that her fellow African Americans co-workers were discriminated against on the basis of their race. This notwithstanding Plaintiff’s allegations that the hostile work environment that Ms. Deen and the other defendants created for black co-workers created rancor in the workplace overall, which detrimentally affected the Plaintiff. To that end, the Court remarked that “workplace harmony is not an interest sought to be protected” under anti-discrimination laws.

So, victory for Ms. Deen on the race claims. But, that sound you hear is not Team Deen popping bottles of champagne.