Companies have begun implementing social media policies to both educate employees and promote responsible online behavior. But what happens when the company messes up online by, oh, I dunno… 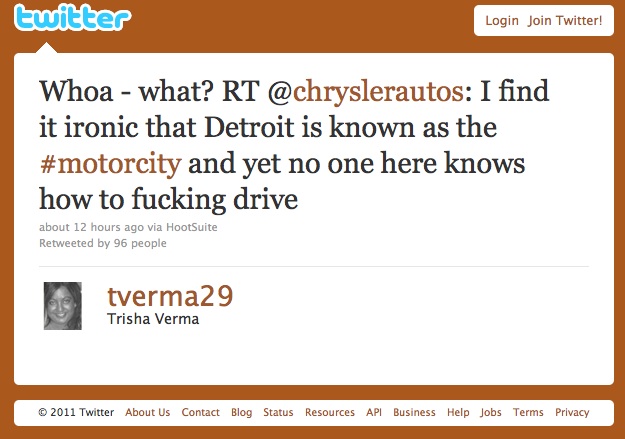 Find out, after the jump…

The official Twitter account of Chrysler brand vehicles dropped the F-bomb this morning in an off-color update from an employee at the automaker’s social media agency.

The post read: “I find it ironic that Detroit is known as the #motorcity and yet no one here knows how to (expletive) drive.”

While the tweet has since been deleted, the original post was retweeted by several people on the popular social network, including Twitter user @tverma29, making it impossible to erase from the Web.

The offensive tweet actually came from an employee of Chrysler’s social media agency. That employee has since been fired.

What can employers learn from this?

When I draft social media policies for clients, I generally suggest incorporating a combination of both rules and guidelines. The rules confirm for employees what they can and can’t do online (e.g., employees can’t share confidential information or publish company marks or logos without prior written permission).

The guidelines are meant to…well…guide. Two of my favorite guidelines are “always think twice before hitting send” (clearly not followed here by the fired “Tweeter”) and “own up to your mistakes.” The latter is a guideline that transcends social media policies. It’s just good business.

Chrysler owned up to the mistake both on Twitter and on its blog:

“Chrysler Group and its brands do not tolerate inappropriate language or behavior, and apologize to anyone who may have been offended by this communication.”

But was the right move an apology and a firing? Or was it, as reflected in many comments to the blogged apology, something else? Should Chrysler have been less “corporate,” spun this tweet with some creative social media marketing, and given the fired employee a second chance?