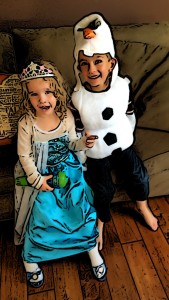 As I type this post, I’m watching two of my kids — one dressed as Olaf; the other Elsa — yelling at each other to stop singing Frozen tunes. Now, they’re wrestling — I don’t remember that from the movie. For a snowman, that Olaf is pretty tough. Oh, damn! Parent of the year here has let it go — see what I did there — on too long.

Now, let’s go down to Puerto Rico, In my mind, I’m already there; sitting on the beach away from the cold, where the only frozen is my daiquiri.

While not at work, an employee receives harassing Facebook messages

But, before I adjust my Speedo and hit the water — don’t worry it’s a private beach, and a Corey Feldman sighting on the other side of the island means that the paparazzi are gone — I’ll share with you this case about a former employee of a Puerto Rican municipality. This plaintiff alleged that she was subjected to a hostile work environment based on her gender. And part of that hostile work environment was a series of Facebook messages, which included crude comments about the plaintiff’s gender and sexuality.

At work or at home, discriminatory Facebook comments can create a hostile work environment.

Now, here’s the thing. While the nasty Facebook messages were sent from work, the plaintiff received them at night when she wasn’t working. So, the defendant argued that, as a matter of law, these Facebook messages could not be part of a hostile work environment. The court disagreed:

The Municipality first contends Maldonado is precluded from arguing she suffered an abusive work environment due to incidents that occurred outside the workplace. Maldonado responds that “her absence from the workplace did not make her any less subject [to] attack” from harassing messages. The parties do not cite supporting authority for their arguments. In Crowley, the First Circuit held that “[c]ourts . . . permit evidence of non-workplace conduct to help determine the severity and pervasiveness of the hostility in the workplace as well as to establish that the conduct was motivated by gender.” ….Accordingly, Maldonado is not precluded from relying on the Facebook messages she received solely because they occurred outside the workplace.

This makes perfect sense. Imagine a sexual harassment situation at work where the harassment continues outside of work hours. The nasty behavior outside of the office merely reinforces that the behavior at work is both offensive and unwelcome.

We can change the facts up a bit and still reach the same conclusion. That is, even if the harassing Facebook messages were sent to the plaintiff from a non-office computer, they could still contribute to a hostile work environment. This is especially true if the plaintiff reads them at work.

I’ve discussed before what’s been referred to the 24/7 social media conundrum. That is, as soon as employee abuse of social media — whenever it takes place — touches the workplace, then it becomes the employer’s problem. Therefore, employers should treat these social media harassment issues as they would any other form of harassment: Take them seriously, investigate, and take reasonable steps designed to end it.