Many of you have seen the rat on the right. Well, maybe not that particular rat, but a large inflatable rat, nonetheless. Usually, a union will position the large rodent in front of a business or job site as part of a protest effort.

But, just because a union uses it as a protest symbol doesn’t make it legal. Does it?

Is the rat even legal?

Find out after the jump.

Is it lawful to use a 16-foot inflatable rat to protest a non-union employer?

There are many times when a business will hire a contractor to perform a service for the business. That contractor may be involved in a labor dispute with a union. To up the ante, the union may protest the business that hires the contractor. This is call a secondary boycott.

The National Labor Relations Act prohibits conduct found to “threaten, coerce, or restrain” a secondary employer not directly involved in a primary labor dispute, if the object of that conduct is to cause the secondary to cease doing business with the primary employer. One way that the union can conduct a secondary boycott is by standing on public property adjacent to the business that hires the contractor and hand out leaflets. Another way to conduct a secondary boycott is by bannering. But what using a 16-foot-tall inflatable rat balloon? Is that legal?

According to the majority in Sheet Metal Workers Local 15 (Brandon Regional Medical Center), it may be. Here are the details from the NLRB’s press release.

The Board majority – Chairman Wilma B. Liebman and Members Craig Becker and Mark Pearce – found that the balloon display did not involve any confrontational conduct, unlike picketing. Nor was the display coercive in other ways, the majority found. It observed that the union agents involved in the display did not move, shout, impede access, or otherwise interfere with the hospital’s operations. Rather, the “rat balloon itself was symbolic speech. It certainly drew attention to the Union’s grievance and cast aspersions on [the contractor], but we perceive nothing in the location, size or features of the balloon that were likely to frighten those entering the hospital, disturb patients or their families, or otherwise interfere with the business of the hospital.”

Dissenting, Member Brian Hayes found that the display was coercive, and therefore unlawful. “Considered in the abstract, or viewed from afar, the display of a gigantic inflated rat might seem more comical than coercive,” Member Hayes wrote. “Viewed from nearby, the picture is altogether different and anything but amusing. For pedestrians or occupants of cars passing in the shadow of a rat balloon, which proclaims the presence of a “rat employer” and is surrounded by union agents, the message is unmistakably confrontational and coercive.” 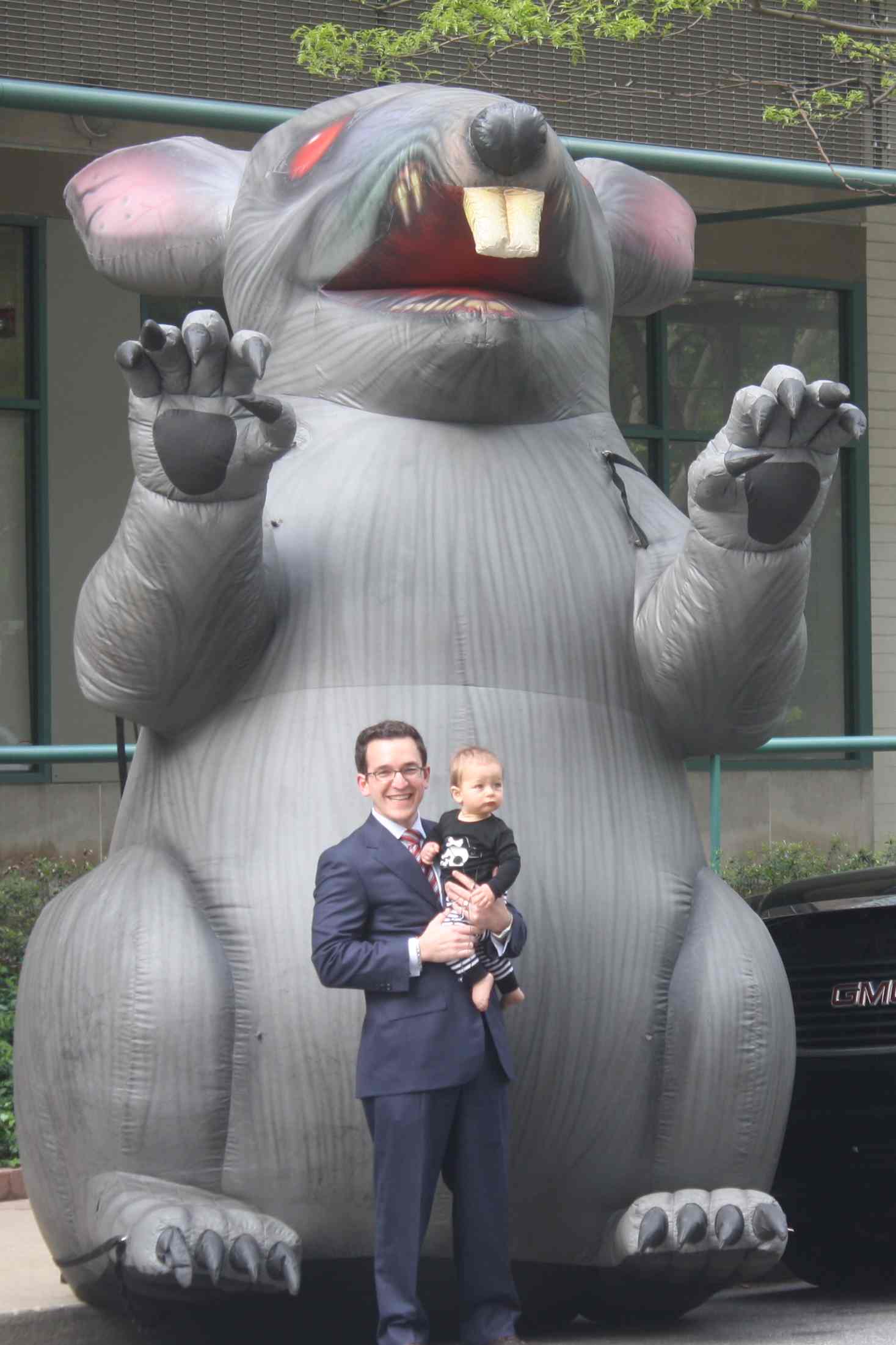 I have seen the rat balloon many times. Hey, that’s me and my son posing with the balloon last year near our house.

Viewed “in the abstract” or in person, this rat is a joke. No reasonable adult who passed this rat on the street would be scared. If anything, it’s an attention-grabber.
Not pictured here, the union agents who let us pose with the rat, were quite friendly and peacefully hand-billed without a megaphone and without blocking anyone’s access to and from the building behind the balloon. Although the secondary employer could not have been happy about the union presence outside, the union was not coercive.
However, pair a rat balloon like this one with large, angry union agents marching or shouting on bullhorns. That combination may create a physical or, at least, a symbolic confrontation between the picketers and those entering the worksite, and that’s coercive picketing, which is illegal.