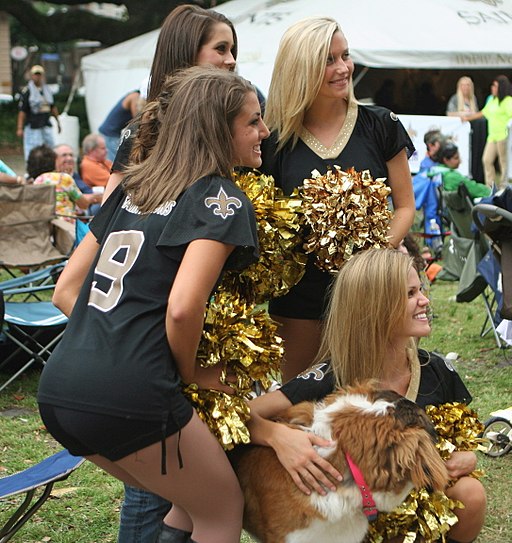 But, is it really discrimination if football players get preferential treatment over cheerleaders?

On Sunday, Ken Belson at the New York Times reported here that a female cheerleader with the New Orleans Saints had filed a Charge of Discrimination with the United States Equal Employment Opportunity Commission.

For those who are unfamiliar with this administrative procedure, under federal law, an individual who claims to be the victim of gender discrimination at work must first exhaust her (or his) administrative remedies by filing a Charge of Discrimination with the EEOC. Once that EEOC investigation ends, the individual may them go to court to pursue that claim further.

A Charge of Discrimination is not a public document — at least not yet in this case. Therefore, the details describe below come from the NYT article:

The complaint, which asserts that the rules in New Orleans reflect outdated views of women, follows a number of gender-related struggles in the N.F.L. over domestic violence and sexual harassment among players and league employees.

According to the Saints’ handbook for cheerleaders, as well as internal emails and text messages reviewed by The New York Times and interviews with [the Charging Party], the Saints have an anti-fraternization policy that requires cheerleaders to avoid contact with players, in person or online, even though players are not penalized for pursuing such engagement with cheerleaders. The cheerleaders must block players from following them on social media and cannot post photos of themselves in Saints gear, denying them the chance to market themselves. The players are not required to do any of these things.

Cheerleaders are told not to dine in the same restaurant as players, or speak to them in any detail. If a Saints cheerleader enters a restaurant and a player is already there, she must leave. If a cheerleader is in a restaurant and a player arrives afterward, she must leave. There are nearly 2,000 players in the N.F.L., and many of them use pseudonyms on social media. Cheerleaders must find a way to block each one, while players have no limits on who can follow them.

According to Mike Triplett’s article at ESPN.com, the Charging Party’s attorney claims that the Saints utilize “antiquated” and “blatantly discriminatory” social media and fraternization policies that are different for female cheerleaders and male players.

A couple of additional caveats:

But, for purposes of the section below, let’s accept everything that has been reported to be in the Charge as true.

Does this really amount to gender discrimination?

In other words, the comparison should be apples to apples. That often means comparing two people who work in the the same position, with the same responsibilities and the same supervisor, and who are subject to the same standards. Otherwise, there are too many other reasons (other than gender) that could explain why two employees receive different treatment at work.

So, are cheerleaders and football players similarly situated?

I don’t think so.

Plus, even if the rules are different for cheerleaders and players, those differences may be non-discriminatory.

Again, we’re only getting one side of the story here, but…

Companies that utilize (or are perceived to utilize) work rules based on stereotyped or antiquated views on how men and women should be treated do risk these types of claims. However, these types of claims often carry bad publicity. Therefore, consider auditing your workplace policies from time to time. Among other things, check to see if any of your policies, while technically legal, may otherwise fail the smell test.