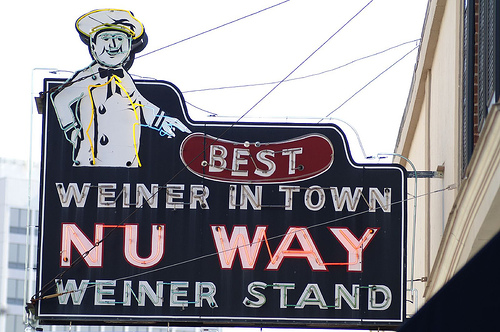 Frankly, Anthony Weiner ain’t got nothin’ on this Weiner.

The EEOC announced on Monday that it had sued Nu-Way Weiners, one of the oldest hot dog restaurants in the country, on behalf of two female employees. More after the jump…

You can find a copy of the EEOC complaint here. The ladies claim that they were subjected to repeated acts of sexual harassment by the restaurant’s female general manager. The EEOC press release describes the incidents as follows:

The harassment included a daily barrage of lewd sexual comments, gestures, and inappropriate physical touching. The general manager groped the women’s breasts and buttocks and frequently asked them to accompany her at a gay club. Both women said that the harassment began shortly after they started working at the restaurant, one in the summer of 2009, the other in January 2010.

The EEOC contends that, although the general manager announced that anyone who complained would be fired, both women openly opposed her inappropriate behavior and asked her to stop. The EEOC also alleges that the harasser fired both women after they had repeatedly rejected her sexual advances. You can find more local-news coverage on the story here.