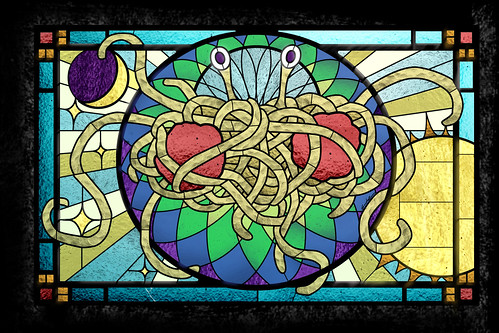 Even a true “Pastafarian.”

We’ve seen it and heard it all.

Except, until I read Sam Reisman’s article for Mediaite, “Federal Judge Rules That Worshipping a Flying Spaghetti Monster Is Not a Real Religion.”

Meet Stephen Cavanaugh. Mr. Cavanaugh is a prisoner in the Nebraska State Penitentiary. Mr. Cavanaugh says he is a “Pastafarian,” i.e., a believer in the divine “Flying Spaghetti Monster” who practices the religion of “FSMism.” Mr. Cavanaugh claims that prison officials refused to accommodate him so that he could pray to the FSM.

The basics of religious accommodations at work: It starts with a sincerely-held belief.

What is a sincerely-held belief?

First, a religion addresses fundamental and ultimate questions having to do with deep and imponderable matters. Second, a religion is comprehensive in nature; it consists of a belief-system as opposed to an isolated teaching. Third, a religion often can be recognized by the presence of certain formal and external signs.

Applying this test to the Mr. Cavanaugh’s situation, the court concluded that FSMism is not a “religion”:

It is, rather, a parody, intended to advance an argument about science, the evolution of life, and the place of religion in public education. Those are important issues, and FSMism contains a serious argument—but that does not mean that the trappings of the satire used to make that argument are entitled to protection as a “religion.”

Now, let’s bring this into the workplace.

Title VII of the Civil Rights Act of 1964 forbids employers from discriminating against employees based on religion. As, the EEOC points out, “the law protects not only people who belong to traditional, organized religions, such as Buddhism, Christianity, Hinduism, Islam, and Judaism, but also others who have sincerely held religious, ethical or moral beliefs.”

If an employee has a sincerely-held belief, the employer must reasonably accommodate it, unless doing so would cause more than a minimal burden on the operations of the employer’s business. Examples of some common religious accommodations include flexible scheduling, voluntary shift substitutions or swaps, job reassignments, and modifications to workplace policies or practices.

So, what happens when a Pastafarian darkens your door in Human Resources requesting an accommodation to pray to the flying spaghetti monster?

Apparently, you can tell that employee to GTHO — especially if your business operates in Nebraska. At the very least, if you have a reasonable basis to question the sincerity of the employee’s beliefs, you may ask for additional supporting information.

But, if you’d never read this post, and knew nothing of spaghetti monsters, the safe move is to assume that an employee’s request for religious accommodation is based on a sincerely-held religious belief — even if a newly discovered one. Then, skip to step two and determine whether accommodating the employee would impose something more than a minimal cost on your business. Because, if the answer to that question is yes, then whether the belief is sincerely-held doesn’t matter.