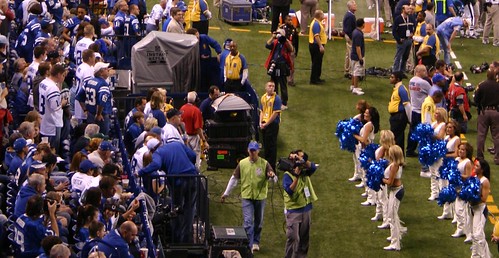 [If you listen carefully, you can actually hear the sound of page-hits and prurient reader interest cascading at The Employer Handbook. It’s got a little funky Salt n’ Pepa beat to it…]

Last May, I slobbered over blogged here about a former Indianapolis Colts’ cheerleader who sued the team claiming that the Colts discriminated against her on the basis of her race (Asian) and national origin (Indonesian).

Earlier this week, the court ruled on the Colts’ motion to dispose of the case. While I think we can all agree that this sort of hard-hitting blog fodder is better suited for a Monday post, I’m going to blog the heck out of the Court’s decision…after the jump. (It’s a long post, but it’s soooooo worth it).

In May, 2010, Malori Wampler became a Colts cheerleader, at which time she signed a contract with the team that contained a morals clause. The court noted that Indianapolis sports teams go to great lengths to protect their reputations in the community; especially, after this infamous donnybrook. This particular morals clause provided that cheerleaders may not pose nude or semi-nude in any media or publication whatsoever.

During her pre-interview, Ms. Wampler told the team that she had been involved with Playboy in the past, but assured the team that she had never posed nude. However, some time later, a loyal Colts fan emailed the team a picture, which consisted of Ms. Wampler in her birthday suit with some strategically placed body paint covering her boobs, hoo-ha, and budonkadonk. (Those are legal terms. Look ’em up.) Consequently, the team fired Ms. Wampler because of both the pictures and her dishonesty. Ms. Wampler then sued for discrimination, claiming that the team had overlooked when a white cheerleader (and HR professional — check her bio) allegedly posed in lingerie as part of a promotional advertisement for a jewelry store, and those photos made it onto the interwebz.

In its tongue-in-cheek opinion (here), the court describes the series of fortuitous events that led to this discovery:

In the photos, Ms. Fonner is on top of a bed with one or two men. And, as fate would have it, shortly after Ms. Wampler’s termination, yet another fan sent [the Colts] a letter, which read as follows:

I was appalled to find very unprofessional, inappropriate photos of your Cheerleader, Breanna (attached) floating around on the internet. There is an entire photoshoot labeled BlumLux consisting of many lingerie photos of Breanna and a man. I think these photographs are extremely inappropriate and explicit when a Colts Cheerleader is wearing black lingerie posing in a bed with TWO men for the world to view….

After receiving the letter, [the Colts] spoke with Ms. Fonner, who informed her that she thought the photos were “okay,” in part because the photographer was the Club photographer. For her transgression …, the Club denied Ms. Fonner an all-expense paid trip to the Pro Bowl, but did not terminate her. In fact, Ms. Fonner remains a Club cheerleader today.

[Editor’s note: Those of you who stopped to Google “Breanna BlumLux lingerie photos” should be ashamed of yourselves. Seriously.]

Burning question: One cheerleader in lingerie; one in body paint, but are they similarly situated?

Ms. Fonner simply did not address the issue with the Club before modeling for the photo shoot…Perhaps Ms. Fonner’s conduct could be construed as a lie by omission, but the ethical disclosure duties of NFL cheerleaders is a question best left for another day.

Notwithstanding, the Court gave Ms. Wampler the benefit of the doubt in comparing their relative levels of undress and deemed the two-ladies to be similarly situated for purposes of a discrimination analysis.

But what about revealing bra-like tops and “booty” shorts? Don’t they count for anything?

Where Ms. Wampler’s case fell apart was that the Colts had two legitimate business reasons to can her (the pics and the lie about the pics), and, try as she might, she could not cast doubt on the team’s explanation.

The Court’s recital of one of Wampler’s arguments is truly classic:

As Ms. Wampler notes, in her capacity as a Club cheerleader she posed in a swimsuit calendar wearing a skimpy bikini. Moreover, she participated in a half-time dance routine where the cheerleaders tore off their uniforms revealing bra-like tops and “booty” shorts and danced provocatively to Lenny Kravitz’s blockbuster song “American Woman”. In one portion of the routine, the cheerleaders sat with their legs straddled apart while rolling their heads back and forth flipping their hair around. (Dkt. #39 at 9.) In Ms. Wampler’s view, how could the Club fire her for doing something that is similar in nature to her day-to-day duties as a cheerleader? To be sure, NFL cheerleaders are not puritans – nor should they be. The job necessarily entails wearing somewhat revealing outfits, dancing somewhat provocatively (but within reason, since NFL games are family affairs), and maintaining a fit and attractive physical appearance. FN4

“This statement is certainly not meant to disparage the character of NFL cheerleaders. In the Court’s view, NFL cheerleaders are, by and large, hard-working and accomplished young women who contribute to the community, motivate the players, and enrich the NFL fan’s experience.”

Ultimately, the Court did not buy any of Ms. Wampler’s pretext arguments and granted summary judgment for the Colts

What can employers take away from this case? If you ever find yourself having to defend against a similar action involving lingerie, body paint, and cheerleaders, you can find my contact information at the top of this page. [Editor’s note: I’m joking. Well, joking just enough so as not to violate the model rules of professional ethics or upset my uptight readership].