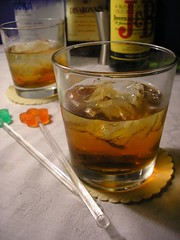 From the blog that previously brought you “Smoke pot + grizzly bear bite (in the butt) = collect workers’ comp,” comes the story of the boozing builder who, well, I’ll let the Court of Appeals of Utah explain:

Mr. Wood was engaged in work activities on behalf of Karr during the morning and early afternoon of May 1, 2007. He began drinking alcohol at the work site at about 2 p.m. and continued until he had consumed a small bottle of whiskey and more than half a fifth of vodka. By 4 p.m. he had stopped performing any work duties for Karr and removed himself to a 1st floor closet where he slept for two hours. When he awoke, he made his way up to the 2nd floor but did not resume any work on behalf of Karr. He fell into the elevator shaft and suffered the injuries for which he now claims workers’ compensation benefits.

Amazingly, the court was less than blown away by such arguments as:

Plus, the court disbelieved Wood, when he testified that he did not drink any alcohol on the day of his injury and fell down the elevator shaft while masking the trim around the second-floor shaft opening.

While the Marijuana-toking-grizzly-bear-snack Montanan collected workers’ compensation, the court in Utah sobered up and denied benefits to the tripping tippler.