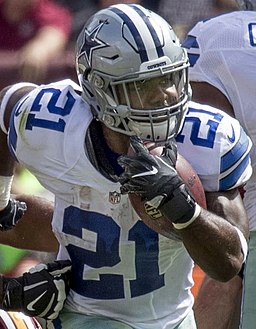 Finally, I’m putting this law degree to good use.

Elliott is playing in Week 1 against the Giants. The NFL has confirmed that.

Will Elliott play in Week 2?

That’s to be determined. Let’s briefly recap why:

So, that leaves a couple of possibilities:

Now, generally, judges don’t vacate arbitration awards. Indeed, when the arbitrator’s decision is in line with the NFL collective bargaining agreement, then the outcome will stand. So, if Judge Mazzant connects those dots, we won’t see Elliott until he returns in Week 8. If however, Judge Mazzant walks in the footsteps of NY federal judge Richard Berman, who overturned Tom Brady’s 4-game suspension, then Elliott could miss no time at all. Alternatively, Judge Mazzant could vacate the arbitration award and remand the case to the arbitrator to fix any underlying procedural defects. If that happens, Elliott returns immediately and would continue to play indefinitely.

Is this Deflate-Gate all over again?

The NFLPA here argues a mixed bag for Elliott. That is, it argues that the underlying facts don’t support a six-game suspension plus Elliott was denied certain due process along the way. To me it reads a bit like spaghetti against the wall.