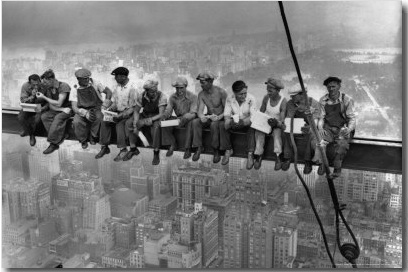 Today, I get to sleep in because The Employer Handbook has a guest blogger. It’s Andrew Kim, a summer associate at Dilworth Paxson LLP:

Some people have no problem with heights (as seen above). But Darrell Miller, a bridge worker, had acrophobia (a.k.a. the fear of heights). In fact, Mr. Miller had suffered a panic attack due to that very fear while working on the bridge crew for the Illinois Department of Transportation (IDOT). He then sought a reasonable accommodation so that he wouldn’t have to work on big bridges. IDOT refused. Did it violate the Americans with Disabilities Act?

Mr. Miller had been working at IDOT for several years on a bridge crew that worked like a good sports team–each player filled a certain role. Often, however, they would chip in and help Mr. Miller. Since Mr. Miller was scared of heights (and everyone knew it), he often worked on the ground.

After his panic attack, Mr. Miller was formally diagnosed with acrophobia. Consequently, IDOT deemed Mr. Miller unfit for work. Mr. Miller requested a reasonable accommodation, but his request was denied, and IDOT ordered him to return to work. However, he was later discharged for making what IDOT interpreted as a threat. Mr. Miller subsequently sued IDOT, alleging that IDOT: (a) regarded him as disabled, (b) unlawfully refused to accommodate his acrophobia, and (c) retaliated against him for requesting an accommodation.

The case is Miller v. IDOT.

For more on dealing with employee requests for reasonable accommodations, check out this earlier post.