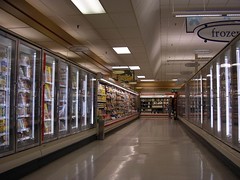 I’ve come up with some pretty creative defenses to unlawful harassment. Usually, however, before I file a pleading, I take out my trusty red pen iPad and delete those arguments that are just so outrageous that I feel my client will lose credibility with the court.

But that’s just me.

After the jump, I have a recent federal-court decision in which a Maryland grocery claimed that the [alleged] relentless sexual harassment of a female employee by the store’s male manager wasn’t “sexual harassment” — that would be illegal. Rather, it was “exotic dancer” harassment.

In Samuels v. Two Farms, Inc., the plaintiff claimed that her boss had subjected her to some pretty nasty treatment. I’ll spare you all the details (until later in this post). If you can’t contain yourself for 20 seconds, you can find them here. The plaintiff also claimed that her boss had reduced her hours. So, to make ends meet, she worked extra nights as an exotic dancer.

*** Note: I could have taken the extra-snarky route and done the ol’ librarian, strikethough before mentioning the “exotic dancer” gig. I’m above that. But, did I search for Ms. Samuels on Facebook? It’s just how I roll. Hey! Read my book; I have a whole chapter on it. ***

So, where was I? Oh yes. The defendant argued to the court that because the manager’s alleged conduct was predicated upon her employment as an exotic dancer, rather than the plaintiff’s gender, she could not prevail on a claim for sexual harassment. Why is this so hella-desperate important? Because to prevail on a claim of sexual harassment, a female plaintiff must show that the unwelcome conduct to which she was subjected was based on her sex.

The Court’s response says it all:

Defendant’s argument…strains credulity. As an initial matter, Stevenson made overt and implicit sexual advances toward Plaintiff — leering at her breasts and buttocks, frequently touching her in unnecessary ways when making “offensive” comments, and even once trying to kiss her. He also asked her, in Defendant’s own words, whether “she would perform sexual favors for him and his friends” if he visited her at the club….Additionally, Stevenson’s comments to Plaintiff beginning in early July 2007 are replete with “sex-specific and derogatory terms” indicating that he intended to demean women. First, Plaintiff alleges that Stevenson regularly talked about women in degrading language, referring to them as “ghetto trash” and “bitches.” Second, Stevenson’s remarks to Plaintiff included overt comments about female body parts, with Stevenson repeatedly discussing the way that Plaintiff’s clothing fit over her breasts and buttocks, and asking about whether she exposed her vagina during her employment as an exotic dancer. Third, Stevenson asked vulgar questions about Plaintiff’s sexual activity, including masturbation and oral sex, both at and away from the club where she worked as an exotic dancer. From these facts, taken as a whole, a reasonable jury could well find that Stevenson’s harassment of Plaintiff occurred because Plaintiff is a woman…

Right up there with the “she was asking for it” defense. Clean up on aisle wowwwweeeee.