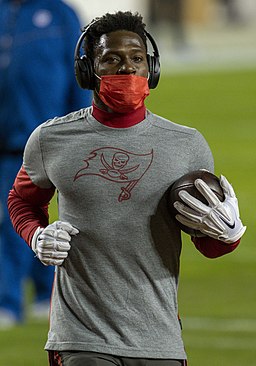 The Tampa Bay Buccaneers pulled off a tremendous late comeback to defeat the New York Jets yesterday. However, Tampa Bay Wide Receiver Antonio Brown’s abrupt exit during the waning minutes of the third quarter is what has people talking.

With about these minutes left, Brown removed his pads and jersey, tossed his shirt and gloves to the crowd, ran across the end zone while the two teams were still on the field, and exited through the players’ tunnel.

According to Fox Sports, the strange exit followed a sequence in which Tampa Bay Head Coach Bruce Arians tried to get Brown to go into the game, but Brown refused. When Coach Arians tried again, and Brown resisted, Arians told Brown to leave.

After the game, Tampa Bay Head Coach Bruce Arians confirmed that Brown “is no longer a Buc.” According to USA Today, Brown was just eight receptions, 55 yards, and one touchdown short of three bonuses that would equal $1 million in incentives.

While Brown’s behavior on Sunday was shocking, the Buccaneers understood that they were taking a risk on a player with a checkered past when they signed him to a series of one-year contracts in 2020 and 2021.

In 2019, the Pittsburgh Steelers traded Brown to the Oakland Raiders. The Raiders released before this start of the season after Brown requested his release in an Instagram post. He then signed with the Patriots, only to be released less than two weeks later after an accusation of sexual assault surfaced. In 2020, the NFL suspended Brown for eight games for violating the league’s personal conduct policy. The NFL suspended Brown again this season for three games for presenting fake COVID-19 vaccination credentials. (Source: ESPN.com)

And yesterday appears to have been his last straw.

It’s hard for me to feel sorry for Antonio Brown — given Brown’s recent track record and choices to squander more chances than most employees get. I’m not suggesting that either the Bucs or the NFL owe him anything. The employment lawyer in me knows that they don’t. But CBS Sports’ Jason LaCanfora’s take resonated:

Watching [Brown] storm from the sidelines, upset about being benched at a time when his finances are in poor shape and he is chasing more incentives, and begin a macabre dance of disrobing and chucking things into the stands before sauntering, shirtless, off the field and seemingly out of the stadium, is as jarring as it is sad.

For this to be his final act ever in an NFL uniform, in all likelihood, is perversely somewhat fitting but it doesn’t make it any less of a cause for serious concern about Brown’s awareness and faculties and mental health. A diagnosis of some sort would not excuse any of his many mistakes, but it might further explain them.

I doubt that we’ll ever see Antonio Brown in an NFL game again. Let’s hope that he gets the help that he needs.