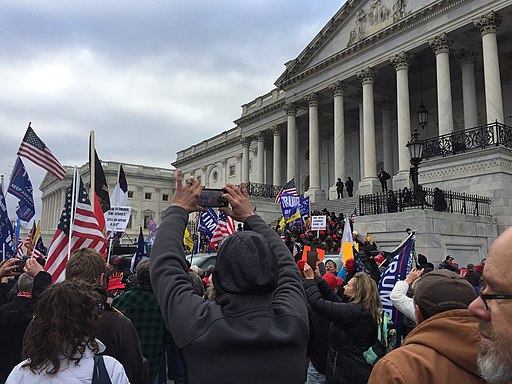 Did I mention yesterday that, among the many topics that Dan Schwartz and I will discuss at noon on Friday’s free Zoom chat, we’ll probably touch on employee free speech? (Click here to register.)

But this doozy can’t wait until Friday.

A peaceful January 6 in Washington D.C.

In the complaint, the plaintiff alleges that she visited Washington, D.C., on January 6, 2021. The plaintiff claims that “[s]he did not participate in any rioting, she did not observe any rioting, and she did not hear of any injuries to persons or damages to property during her peaceful visit.”

She just listened to speeches, walked to the Capitol, and then she left.

“Uplifted by the virtue of her participation in a peaceful protest.”

So you may be wondering how did anyone know that she was in DC on 1/6?

Well, that’s where it gets interesting.

According to the plaintiff, after she returned home, she “felt uplifted by the virtue of her participation in a peaceful protest” and “posted two ‘selfies’ with her friends and at least one smiling police officer in front of the Capitol to a comment thread on the social media of [another individual]” where “[s]he believed she was engaging in a debate over the nature and scope of a protest at the Capitol.”

The plaintiff claims that the individual then “probably posted the written comments from the social media page to Defendant’s website.” These comments involved another Facebook user whom the plaintiff described as “apparently unaccustomed to societal norms,” who insulted her with “the most vile and vicious insults in the human vocabulary,” many of which the plaintiff also considered sexist.

This seems a touch hyperbolic. I read the Facebook posts attached to the complaint. He called the plaintiff “a liar and a f**king idiot” who was “bent with [her] bulls**t.” He also told her to “f**k” herself.

The plaintiff claimed that the defendant fired her within 48 hours with “no formal investigation,” “no due process,” and “no written explanation” because “[a]pparently, Defendant adopted a version of the events in Washington, D.C., which had been advanced by a particular cancel culture media outlet.”

So how did the defendant allegedly violate the law?

But according to the plaintiff, the defendant violated something called the Tom Bane Act, which is a California statute and has nothing to do with Batman. The plaintiff described the violation as one in which the defendant “intentionally interfered with her civil rights by threats, intimidation, or coercion [that] caused Plaintiff to reasonably believe that if she exercised her constitutional rights to speak freely, peaceably assemble or petition her grievances to the Government, Defendants would terminate her employment and report her to law enforcement….”

The plaintiff also claims “wrongful termination of employment in violation of public policy” and “breach of the covenant of good faith and fair dealing.”

So now the plaintiff is jobless and suing for $10 million, which she quantifies as $3,000,000 in economic damages and at least $7,000,000 in general, special and non-economic damages. She also seeks to recover her attorney’s fees and costs, among other things.

Ok, I’m not a California lawyer. So, I’m not qualified to opine on such things. I’m hoping that one of you west-side legal eagles will email me to handicap the plaintiff’s chances of success here.

But, if I were to guess, I’d peg her chances of prevailing before a California jury at somewhere slightly below my chances of running a four-minute mile backward in flip-flops on a quicksand track.

I say this because, generally speaking, employees can be fired for any reason or no reason at all.

And, yes, that would include attending the Capitol riots and posting selfies on social media.