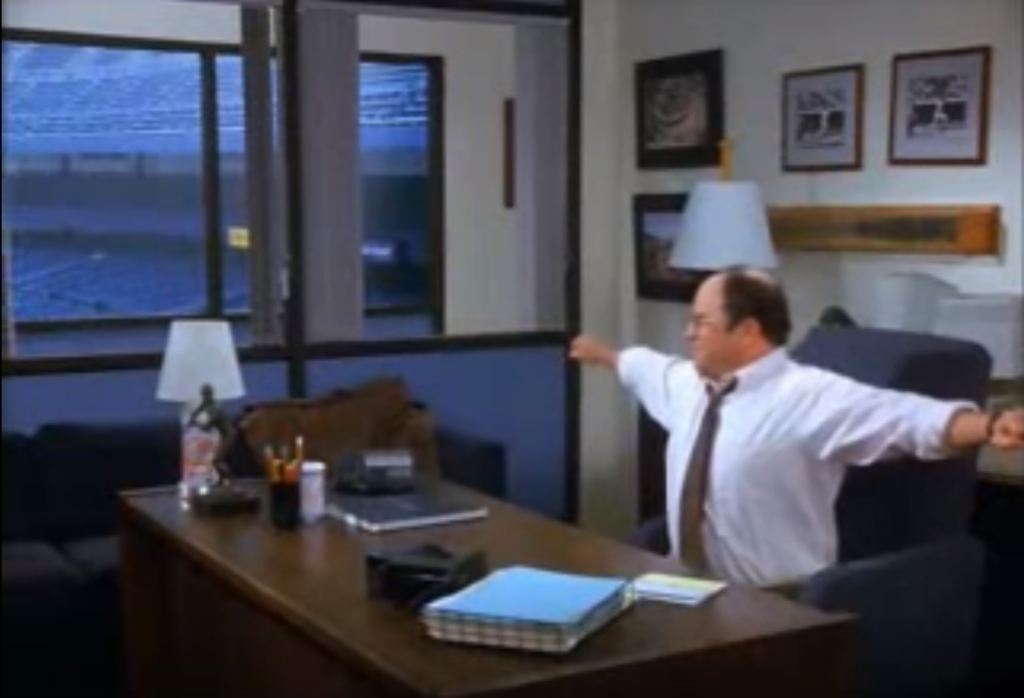 You know that Seinfeld episode.

The one where George gets a customized office desk for taking naps during the day?

I love that episode.

My favorite part is when “George Steinbrenner” calls in the bomb squad (after Jerry calls in a bomb threat) only to discover George’s  “empty calories and male curiosity.”

What I don’t recall from that episode was a disability discrimination lawsuit.

(Maybe that followed one of those Play Now episodes instead.)

However, there is this Northern District of Texas opinion about an employee who was caught sleeping under her desk, fired for it, and later claimed disability discrimination.

In the months leading up to the plaintiff’s termination of employment, the defendant caught her sleeping on the job a few times. But, there was also this one incident at work in which defendant called an ambulance to transport the plaintiff to the hospital. However, she returned to work with no restrictions. Then, it was only after the under-the-desk sleeping incident that the plaintiff utilized the defendant’s EAP program.

So, how’d plaintiff’s disability discrimination claim work out for her?

Kinda like Kramer going after the Oh Henry fortune.

Let’s read from the opinion together:

Plaintiff admitted that it was critical in her role as a customs clerk to maintain complete attentiveness at all times … [and] failed to point to any summary judgment evidence that a reasonable accommodation would have allowed her to perform her job.

Plaintiff has also failed to establish that she was subject to an adverse employment decision because of her disability….Plaintiff does not challenge that defendant sincerely believed she was sleeping. In any event, whether plaintiff was under her desk because she suffered an anxiety attack or because she was sleeping is not dispositive. The essential question in evaluating whether an employment decision was wrongful is whether the employer reasonably believed an employee was engaged in wrongdoing.

There is no summary judgment evidence that defendant did not honestly and reasonably believe that plaintiff was sleeping under her desk and that whatever caused that to happen prevented plaintiff from being qualified to perform the duties of her job with defendant.

There you have it. Defendant prevails.

So, next time you sit for your SHRM-CP, just remember the non-legal advice that you learned at the ol’ Handbook: You can fire an employee for sleeping under her desk at work.