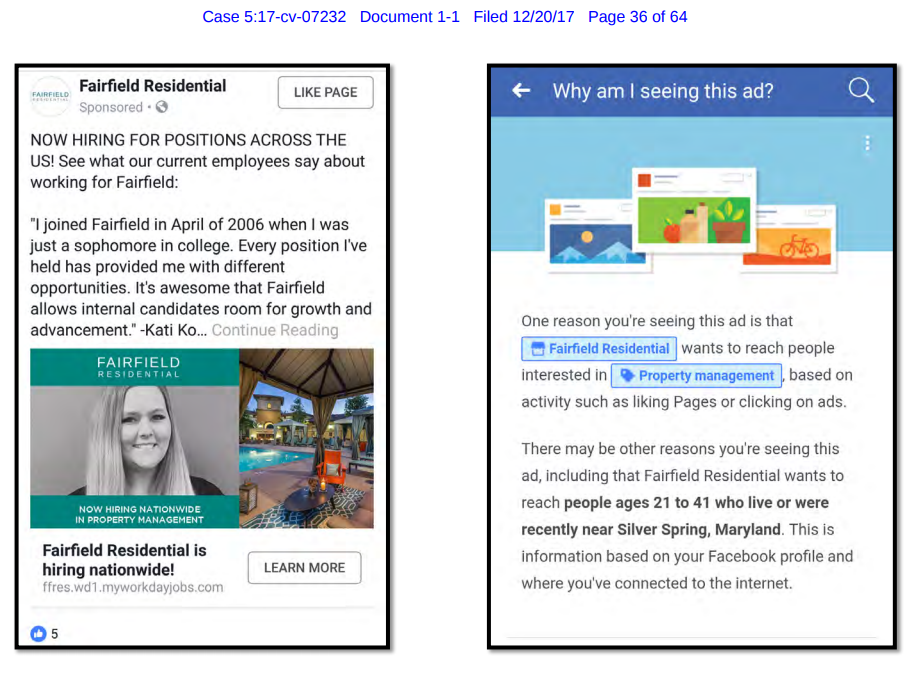 Hundreds of large employers, including Amazon, T-Mobile US, and Cox Communications allegedly engaged in the unlawful practice of excluding older workers from receiving job ads on Facebook for open positions at their companies, claim the Communications Workers of America (CWA) and three workers. Together with powerhouse law firm Outten & Golden, they filed this class action lawsuit yesterday in California.

More on the lawsuit.

According to the lawsuit, “[w]hen selecting the population of Facebook users who will receive employment ads, employers and employment agencies routinely focus their ads on prospective applicants who are in age bands that exclude many workers who are 40-years-old or greater, e.g., workers who are ‘ages 18 to 38,’ ‘ages 22 to 45,’ or ‘ages 21 to 55,’ thereby preventing older workers from receiving advertising and recruitment for job opportunities, upon information and belief.”

The lawsuit includes screenshots from Facebook that purport to back up these claims. (Like the one above).

A press release from Outten & Golden, notes that “a year ago, an investigation by the news organization ProPublica found that Facebook’s platform made it possible for African Americans, Latinos, and Asian Americans to be excluded from receiving ads for various economic opportunities, including housing and employment ads.”

A few months, I presented with the EEOC about the Age Discrimination in Employment Act. Part of our message was for employers to be careful about not only how they advertised jobs (e.g., don’t expressly advertise job openings to narrow age bands or use other terms like “digital native”) but also where they advertised those positions. That is, limiting advertisements to a particular social network that is generally frequented by younger users could unintentionally exclude a broad range of older applicants (or other protected classes too).

And even if your job searches are algorithmic, make sure that the algorithm itself isn’t rooted in age bias, whether explicit or implicit.

I don’t pretend to know how this lawsuit will conclude — it’s way too early to say. But, if those pictures from the complaint, like the one above, are worth anywhere close to 1000 words, then the defendants have a tough road ahead.