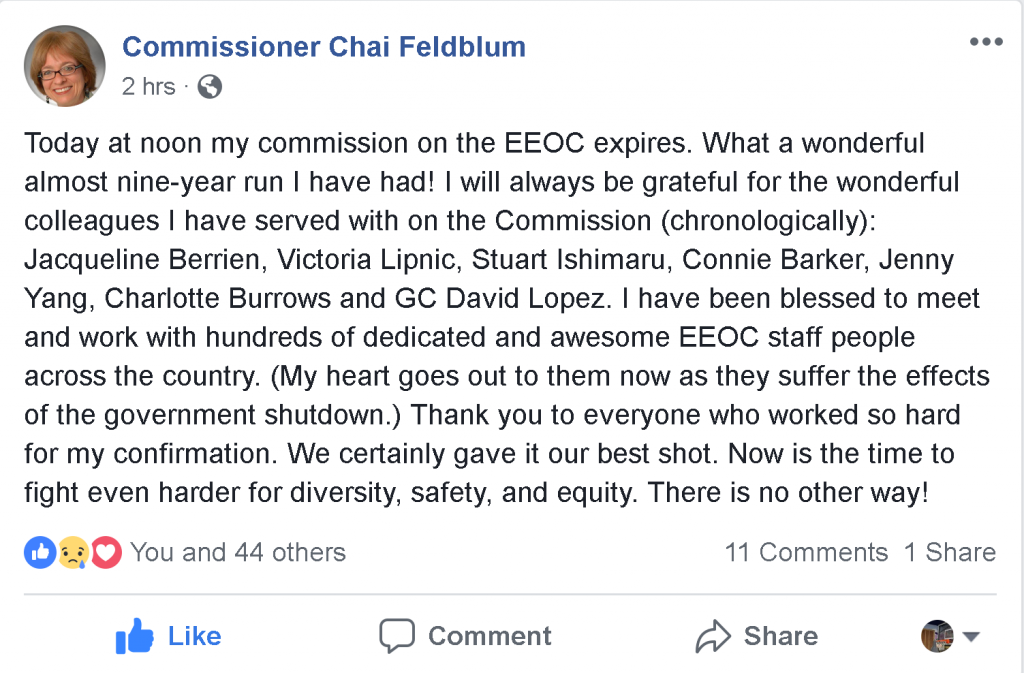 Yesterday, was Chai Feldblum’s last day on the job as Commissioner at the U.S. Equal Employment Opportunity Commission.

According to her EEOC bio — I’m not sure how long this will remain active — Ms. Feldblum had two terms as Commissioner spanning nearly nine years. During that time, Ms. Feldblum “focused on all the employment civil rights issues within the jurisdiction of the EEOC. She has focused in particular on the employment of people with disabilities, pregnancy accommodation, sexual orientation and transgender discrimination, harassment prevention, the structure and process of the federal sector complaint system and strategic planning for the Commission.”

Ms. Feldblum would have served a third term as Commissioner — President Trump nominated her — but Ms. Feldblum was never reconfirmed. While this is not meant to be a political post, you can read the timeline here and here.

Now, I’ll do my very best to remove politics from this altogether with a few anecdotes about my interactions with Chai Feldblum.

Chai Feldblum and I met many years ago on social media. No, it’s not like that. Although we have slid into each other’s DMs — but on a purely professional level.

When we eventually met in real life, it was 2014. Chai Feldblum graciously agreed to present at Dilworth Paxson’s Social Media @Work, along with some representatives from the National Labor Relations Board. You can view entire event video here.

What the audience didn’t see — the best time — was at dinner night before.

On the evening before the event, the presenters, me, and a few others enjoyed great conversation at food and an Italian restaurant in South Philadelphia. Since this was several years ago, I don’t recall many specifics from the dinner; well, other than someone showing me the Supreme Court as played by dogs. But, I do recall that my first in-person impressions of Chai Feldblum were that she was a really down-to-earth person who was passionate about her career, her current job, and helping others.

Lawyers that can check these three boxes are alright in my book.

In the years after the Social Media @ Work event, I was pleased to have the opportunity to return the favor by presenting at EEOC conferences, both local and national. Often on “the circuit,” I saw Chai Feldblum, and we would stop and chat for a bit. Sometimes, we’d even talk a little shop, generally, with me needling her by asking when the EEOC planned to announce a hard-and-fast cap on the number of weeks that an employee can take as a reasonable accommodation under the Americans with Disabilities Act.

I think her response was a suppressed eye roll and something along the lines, “Just tell your clients to do what’s reasonable.”

Selfishly, one of my bigger regrets was not landing Chai Feldblum as a guest blogger on The Employer Handbook. Without naming names, I do appreciate the extra candor that some former government officials display when discussing their prior employment. Regardless of whether Chai Feldblum is one of those people, she has an open invitation to guest blog here anytime. In the meantime, you can check out her blog here.

Until then, I thank Chai Feldblum for her service and wish her nothing but the best in her post-EEOC career.