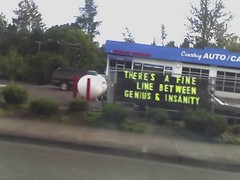 There’s a fine line between genius and insanity.

When applying for a new job, you need more than just a resume to stand out from the crowd. But, go too far, and you crash, burn, and become that person whom hiring managers discuss when sharing their worst interview stories.

Speaking of which, yesterday, CareerBuilder published the results of a study in which it asked 2,076 hiring managers and human resource professionals nationwide to share the most memorable methods candidates have used to stand out from the crowd, and whether their creativity got them hired.

And these ten moves, not so much…

Me? I’m easy like Sunday morning. I would hire anyone on the spot who did this.

What about you? What is the single best, original way a job candidate won you over? Let me know in the comments below. Also, let me know the one that had you calling security.