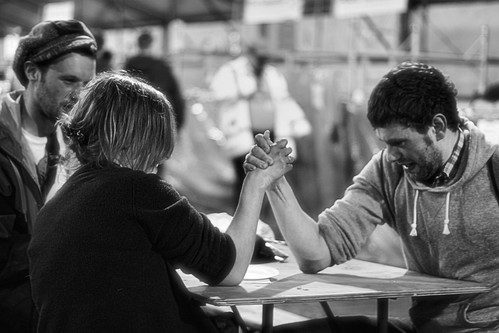 I picture it happening something like this. But, with inflatable sumo suits,  and some Spandau Ballet, or maybe Pantera, and yeah…

Ok, not exactly. According to the Fifth Circuit Court of Appeals in Porter v. Houma Terrebonne Housing Authority (opinion here), it went more like this:

Tyrikia Porter worked for the Houma Terrebonne Housing Authority for several years. She offered her resignation in June of 2012, but before finishing her employment, she testified against the Executive Director, Wayne Thibodeaux, claiming sexual harassment. When Porter attempted to rescind her resignation at the urging of other superiors at work, Thibodeaux rejected her rescission.

Is refusing to accept rescission of a resignation an adverse employment action?

An essential element of a retaliation claim is that the employee was subjected to a materially adverse employment action. A termination is the clearest example. But, a voluntary resignation, not so much.

But, how about this shade of gray? Ms. Porter resigned with lots of notice. But, during that notice period, she tried to rescind her resignation. Oh, and did I mention that this employer had allowed other employees to rescind their resignations? And, of course, you have other supervisors who were encouraging Porter not to resign. Still, the lower court granted summary judgment for the employer.

On appeal, the Fifth Circuit Court of Appeals noted that most courts have viewed the failure to accept rescission as something less than an adverse employment action in retaliation cases. However, the Fifth Circuit underscored that “just as an at-will employer does not have to hire a given employee, an employer does not have to accept a given employee’s rescission. Failing to do so in either case because the employee has [complained about discrimination] is nonetheless an adverse employment action.”

And, in this particular case, it was reasonable for Ms. Porter to expect that her employer would allow her to rescind her resignation. Indeed, the court concluded that a person in Ms. Porter’s shoes may be dissuaded from complaining about discrimination if she knew that her resignation could not rescinded. Therefore, when an employer, like the one here, rejects an employee’s rescission of resignation it may be an adverse employment action.

What should you do when an alleged victim of sexual harassment wants to resign?

Hopefully, you won’t let it get to that point. Rather, when you learn that an employee may have been sexually harassed, please take those complaints seriously and investigate them. And, if those claims have merit, take steps that are reasonably designed to end the purported harassment. Those steps should not — I repeat, not —  include allowing the alleged harasser to make the final decision on whether to allow the victim to rescind her resignation.